Microsoft Ignite – the next evolution of AI and IoT

Last month Microsoft Ignite returned to Orlando for another jam-packed week of keynote speeches, demonstrations, announcements and training sessions and I was lucky enough to go along.

As a first-time attendee, I was pretty excited to hear first-hand what Microsoft have been working on over the last 12 months. What hit me from the off was that it’s quite clear that Microsoft’s mission statement is still ringing true – to empower every person and every organisation on the planet to achieve more.

The event centred around exciting developments in the AI and IoT space and it was the AI pieces that particularly excited me. You can see that AI is a force which Microsoft strongly believes can and should be used for good and for the benefit of each and every individual and organisation and it’s clear to see they’ve been working hard in advancing their AI offerings over the last 12 months.

At the event, they announced a number of new programs, tools and products aimed at showing how artificial intelligence can be used to help people in a variety of ways, whether that’s by helping humanitarian organisations or by providing tools to make machine learning more accessible.

One of the most inspiring and poignant announcements was their launch of their AI for Humanitarian Action. Microsoft said it will partner with non-governmental organisations and humanitarian groups to use AI to help with four key global challenges – helping the world recover from disasters, addressing the needs of children, protecting refugees and displaced people, and promoting respect for human rights.

AI wasn’t the only technology dominating the week’s discussions. New IoT and Edge Computing products were also announced, covering everything from smart spaces to more efficient and productive workplaces.

Last December, Microsoft announced a preview of Azure IoT Central and they’ve just announced the news broadcast that this has been made generally available.

For those of you who aren’t aware, Azure IoT Central is a fully managed SaaS offering that enables users to provision an IoT solution in seconds, customise it in a few hours and go to production the same day. This will be ideal for organisations wanting to dip their toe into the IoT, but if you’re looking for deep levels of service customisation, you’ll be best off engaging with an IoT solutions provider, but Azure IoT central will definitely be a great place to start in my opinion.

Azure Digital Twins – the next evolution in IoT

For its cloud platform Azure, Microsoft has announced the ability to create digital twins.  A digital twin is a virtual representation of physical environments (like a lift, a factory floor, or an office building) that allows these assets to be optimised and managed more efficiently at scale.

Historically, digital twins have been synonymous with industrial equipment, but the concept is broadly applicable to physical spaces. This broader view represents a leading-edge innovation that will help customers and partners model and manage everything from smart buildings, to smart grids, smart factories and smart agriculture —all in a way that is more natural and efficient than traditional approaches.

Through digital twins, enterprises can create models of their real-world Internet of Things layout in the Azure cloud. Essentially they allow you to create a copy of your system so you can tinker with it, without the fear of company downtime resulting from misadventure, as well as develop proof-of-concept ideas with data.

Features included in Microsoft Azure Digital Twins are Spatial intelligence graph; the means to create virtual representation of real environments that help model the interactions between devices, people and places.

Aside from technology announcements, Microsoft also launched their free to use website that guides you through the basic concepts of cloud computing and Azure. If you haven’t checked it out can you do so here.

To hear the keynote speeches, check out the video below.

Alternatively, to read all the latest announcements and releases from Microsoft, click here. 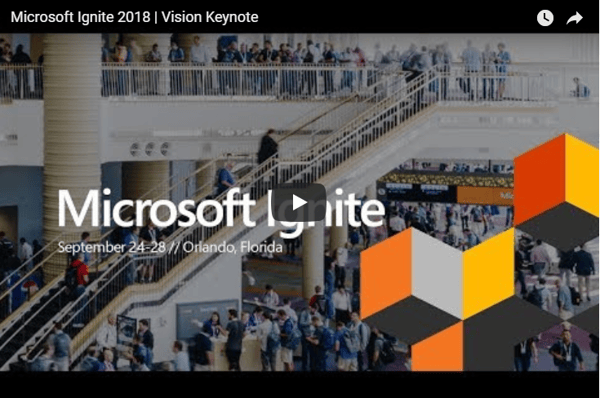 How is Danske Bank using AI to beat fraudsters?

Our top updates from Day 2 of Microsoft Ignite 2019

How is AI transforming citizens' experience across the public sector?